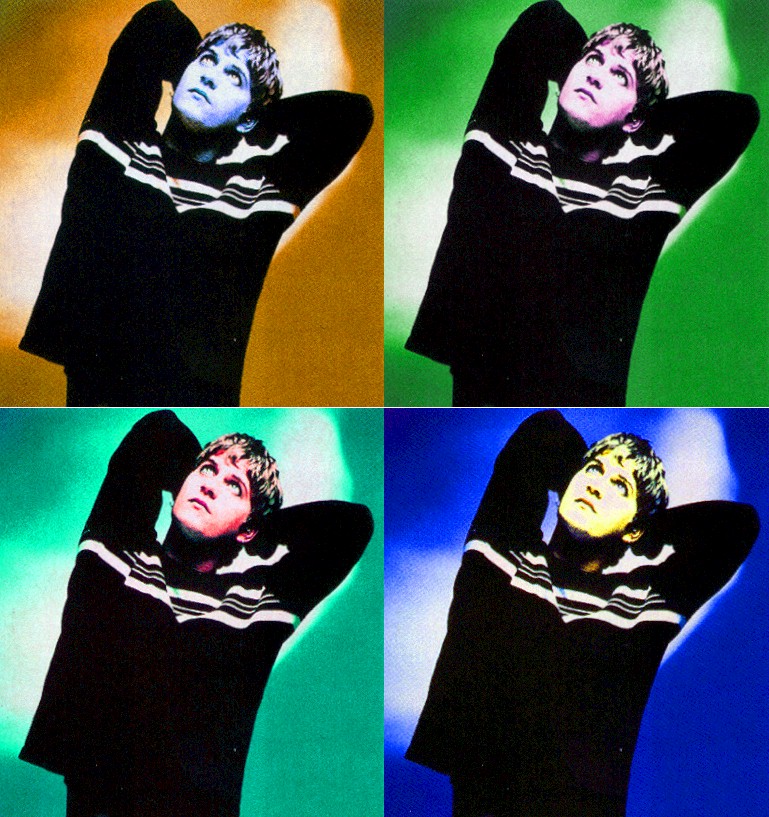 You know David Letterman's Top Ten Lists? Well, this is our rip-off of those. It's also a rip-off of other sites' Top Ten Lists (none Matchbox 20 related, so don't worry). These are not to be taken seriously! Winnie helped out with some of these, which is why they may be a little twisted. If you have an idea for a top ten list, by all means send it in!

10. Those really kick ass foot massages he gives.
9. He's willing to try anything new.
8. He gives it up the easiest and most often.
7. Rob doesn't have to worry about competing with Paul's manliness (or lack thereof).
6. He knows when to keep a secret.
5. Rob doesn't have to pay.
4. Erratic and ever changing hair colors turn Rob on.
3. He wears tight shirts.
2. He sure can play his instrument.
1. 'Cause drummers are always the cutest guys in a band.

10. He can't resist those Kool Aid baths.
9. He is trying to figure out what his natural color is (could it be neon blue?).
8. He needs to completely match his outfits.
7. He doesn't. It changes color on it's own every once in a while. Oh, didn't you hear? Paul is a chameleon.
6. He made a bet a long time ago with Brian for who could have the oddest hair.
5. Paul thinks he's a rainbow.
4. Paul's the quiet, artist type whose only means of expressing his need to paint is through his hair.
3. Come on...you know he loves the attention!
2. 'Cause someone in the group has to be halfway scary looking (although Kyle is right up there now with his beard thing he's got going on).
1. Rob really likes it.

10. Their jeans kept ripping.
9. They feel so smooth against the skin.
8. It was in their contract.
7. To let everyone know that their asses are better than those in Third Eye Blind.
6. Leather pants go with EVERYTHING!
5. To make all the girls in the first five rows swoon (the group tends to forget underwear, esp. Rob).
4. To take attention away from their makeup.
3. They make that cool crinkly sound.
2. They are so outrageously expensive, it is too good of an opportunity to pass up.
1. Because you can just imagine them before a show, in a full length mirror, admiring their backsides.

10. He wanted to be Wolf Man on Halloween, and thought the beard looked good.
9. It took him five years to grow, he's not letting it go anywhere anytime soon!
8. Adam set Kyle's watch ahead an hour, so he thought he was late every morning, not giving him enough time to shave.
7. He likes that "rugged" look. Whatever.
6. He's going through a hippie phase.
5. He wants to be the scariest looking in the group instead of Paul.
4. To cover up his acne.
3. He wants to appear more manly by toning down his incredibly high singing voice (have you heard him in some songs? Yeesh.).
2. He's lazy.
1. As a community service, he's setting up his own bird sanctuary on his face.


Top Ten Reasons Why Joey Should Be President:

10. 'Cause I'd vote for him.
9. It would make activities in the Oval Office more fun.
8. He'd fill the cabinet with circus people.
7. He'd serenade the nation during his State of the Union Address with his sassy keyboard stylings.
6. He could declare war on Third Eye Blind and other offenders of Matchbox 20.
5. He'd make same sex marriages legal, just for Rob and Paul.
4. Everyone should be president at least ONCE.
3. To make being an Intern sound like an appealling job.
2. So he could be the first president to host Saturday Night Live.
1. Because he should. End of story.


Top Ten Reasons Why Adam is So Crazy:

10. His medication makes him do crazy things.
9. He loves the attention (you know he does).
8. It's the only way he can get away with throwing a Frisbee directly at a camera.
7. He was dropped on his head as a child and has never fully recovered.
6. He's actually a ten year old trapped in a thirty something's body.
5. He only drinks Surge.
4. He sniffs glue.
3. He keeps himself so busy so he won't break down and start smoking.
2. He has a chemical imbalance in his brain.
1. He's having a midlife crisis.

10. He really, REALLY has to go to the bathroom.
9. He has a constant itch on his foot.
8. He's trying to imitate Michael Jackson's moonwalk.
7. The cord to his bass is tangled around his feet and he's trying to get it untangled.
6. He has to be in constant motion or he'll explode.
5. He frequently gets lost on stage and has to retrace his steps to figure out where he is...and why not do that in style?
4. He's hoping to start the next dance craze.
3. To take attention away from Rob and onto him.
2. He's drunk and is actually stumbling around.
1. It's the only dance he knows how to do.


Top Ten Reasons Why the Band Doesn't Like David Hasselhoff:

10. He has a best selling album in Europe.
9. He gets to work with Pamela Anderson and they don't.
8. He knows more about breast augmentation surgery than they do.
7. 'Cause he didn't hit on Rob.
6. He's more buff than they'll ever be.
5. None of them wants to admit that they have a poster of him in thier bus.
4. David is really Pookie's father who abondoned his 13 children.
3. 'Cause he looks like Rob's ex.
2. 'Cause he's Adam's current "friend".
1. Because he's David Hasselhoff.


Top Ten Things the Band Doesn't Want Anyone to Know:

10. Three words: Rob and Paul.
9. They didn't write their songs; they found what we know as their cd in a dumpster and just stuck the name "Matchbox 20" on it.
8. They all began their careers in the Mickey Mouse Club.
7. Matchbox 20 and Third Eye Blind are best friends!
6. There are pictures of Rob online when he was a little too drunk, and in a toga on top of a table screaming the Declaration of Independence.
5. The guys in the band are actually women/transvesties/hermpahodites.
4. They found Kyle and Adam in a circus sideshow.
3. Rob graduated from Harvard and has a degree in law.
2. Paul's parents really DO own a porn shop.
1. David Cassidy produced their album.


Top Ten Things the Band Should do on the Next Tour:

10. Choreographed dance moves.
9. Open for Boyzone.
8. Have a special guest appearance by Winnie the Pooh.
7. Stage dive.
6. Not have a second tour, but join the Boys of Summer Tour. Get your tickets while you still can!
5. Hold a revival.
4. Team up with Third Eye Blind.
3. Sing gospel songs.
2. Have backup dancers/singers/strippers.
1. GO COUNTRY!

10. He's just really dumb.
9. He's really a koala that the band picked up in Australia.
8. He's going for the Guiness Record for the "Longest Time Spent Not Speaking".
7. He's a former monk who's vow of silence has not yet been completed.
6. He is a former government spy who has been sworn to secrecy.
5. He's still going through puberty (can you say Greg Brady?)
4. He's an illegal Cuban refugee who doens't speak English.
3. He has nothing to say.
2. He overdosed on Helium as a child and his voice is permanently stuck on ultra-high.
1. 'Cause when he does, Rob takes him backstage and spanks him.

10. Because they are bad to the bone.
9. Stephen Jenkins doesn't.
8. They have problems with Halloween being only one day out of the year.
7. They all have such pretty eyes.
6. They have to take advantage of all the new products out there!
5. Rob wants to impress Paul, Paul wants to impress Kyle, Kyle wants to impress Adam, Adam wants to impress the fans, and Brian's afraid of being spanked.
4. They have issues with the whole gender thing.
3. Their skin is really green.
2. The band owns stock in Maybelline.
1. 'Cause they look so pretty!!


Top Ten Reasons Why Joey is Gone: (thanks to Jeannie for this idea!)

10. He was captured, believed to be an illegal alien, and sent to Mongolia.
9. He's not. He's invisible.
8. He's taking time off to "find himself".
7. He's staying in Germany with David Hasselhoff.
6. He was the inventor of Pokemon and is now reaping the economic benefits in his mansion in Cancun.
5. He took time off to become the founder of the underground anti boy-band movement.
4. He's secretly running for president.
3. He's really a woman and...oh my god..he just had a baby! Congrats!
2. You know Andy the monkey from the Dominoes commercial? I'll just leave it at that...
1. He's tired.

10. A swarm of locusts attacked him suddenly and with tragic results.
9. He's balding and hiding the issue.
8. He has contracted a rare disease that makes his hair grow in stubbly and fall out when it gets too long.
7. He wants to be just like his idol, Sinéad O'Connor.
6. He's becoming a monk.
5. Lice.
4. The constant dying jobs resulted in his hair falling out.
3. It was a birthday prank gone terribly wrong.
2. He leaned a little too close to a fan (either the mechanical kind or the music loving kind would work).
1. All the chicks dig it, man.