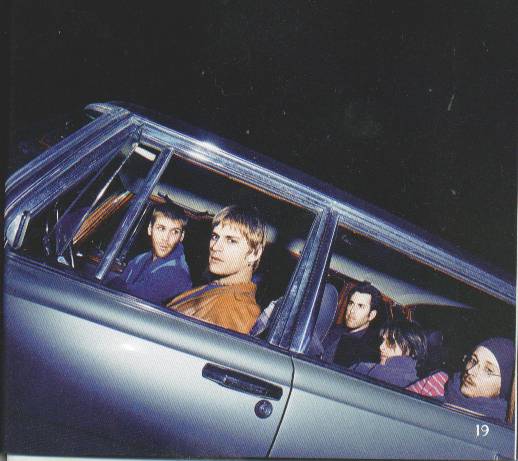 It's amazing what winning a Grammy award can do for your career. Matchbox Twenty hardly caused a ripple when their debut album "Yourself Or Someone Like You" was released in 1996. For sure, it has sold 10 million copies to date and they did have a big hit with "Push", but by and large, Matchbox Twenty was lost among the sea of angst-ridden American heartland rock bands and singer Rob Thomas was just another nameless frontman with a not-too-distinctive throaty voice. Then came Lady Luck in the shape of veteran guitarist Carlos Santana

The Rob Thomas and Santana's collaboration "Smooth" received massive airplay and got most people wondering, "who the hell is Rob Thomas?" The "little-known" singer went on to win three Grammy Awards - "Song of the Year" (with co-writer Itaal Shur), "Record of the Year" (along with Santana, producer Matt Serletic, and engineer/mixer David Thoener) and "Best Pop Collaboration with Vocals" (with Santana). Now, months after that wonderful Grammy night, Rob Thomas and Matchbox Twenty are back with a new album and this time, there is a level of anticipation. Can Thomas shine without Santana?

After spending two years on the road following the release of "Yourself Or Someone Like You", the band's maturity and strength have grown, making their second album "Mad Season" a much more satisfying experience than their previous effort. Perhaps the comparisons to Hootie And The Blowfish could finally be laid to rest.

With Grammy winner Matt Serletic in the producer's seat once again, the new Matchbox Twenty album boosts of powerful rockers like "Angry" and "Black & White People". The angst is less contrived now and Rob Thomas' emotional vocals, thankfully, seldom degenerates into overdramatic posturing. The highlights on "Mad Season" though are the tender pop songs ("Bed of Lies", "Leave" and "If You're Gone") where Thomas gives his most intense and sensitive vocal delivery.

The band has even added funk elements on the stunning title track and the inevitable Santana's influence can be heard on the foot-tapping track "The Burn". My personal favourite is the delightfully gorgeous "Last Beautiful Girl", a groovy track with soaring harmonies and nifty guitar playing. It epitomizes the transformation of Matchbox Twenty from an unspectacular bar band to one with class written all over it.

"Mad Season" couldn't have come at a better time. Fresh from Rob Thomas' Grammy wins, this album will get the attention it deserves. Success has definitely not ruined Rob Thomas and Matchbox Twenty. In the big league now, Matchbox Twenty has handled the pressure well and rocks with more self-belief, poise and invention.