NEW YORK (CNN) -- When a rock band puts out an album and nobody buys it, usually that band is never heard from again. Matchbox 20 could easily have been one of those dead-on-arrival bands; only friends and immediate family even cared when they first released their debut in October 1996.

But by the time CNN's Showbiz Today first interviewed the band, in the summer of 1997, "Yourself or Someone Like You" had generated hit after hit, from "Long Day" to "Push" and "3 AM."

Now, after 75 weeks on the "Billboard" album chart, the CD has been certified platinum six times and is headed for seven. Matchbox 20 can joke about the slow fuse that finally set off a Roman candle of hits: "I was hoping there was going to be 10 hits off the album, actually," quipped one of the band members.

'Insult us all you want'

The bad news, if there is any, is that Matchbox 20 gets virtually no respect from rock critics. The band members couldn't care less.

"You can insult us all you want," says drummer Paul Doucette. "That's fine. But if, like, if you're insulting us and 7 million did go buy our record, so are they idiots now?" 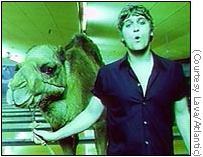 Adds lead singer Rob Thomas, "I say, if you're going to bash us, just be clever."

Among the critiques they found less than clever came with an unflattering photo of Thomas that recently ran in Rolling Stone. "I was fat, man. I had a lot of things going, and I gained a little weight, and I lost it," Thomas readily admits.

But, he continues, "We've done a lot of things. We put out a good record, and we've been on tour for two years, and we've been making bigger and better tours. But the thing they saw fit to put was, 'Hey, Rob's putting on a little weight,' you know. If that's what everybody wants to hear, then go for it, you know what I mean?"

All things considered, though, it's good to be Matchbox 20.